Become What You Rehearse. You Deserve It emerged from a mutual feeling of remorse, pain and pride felt by Irish nationals and many nations around the globe when thinking about our histories — notably, the nation of South Korea, a city named Gwangiu which was the site of a two-month residency for Ciara Lenihan and Lisa Freeman. Their immersive experience within the culture and political climate translated into a multi-layered performance event utilising the body, a large three story space, various materials, slapstick comedy and interestingly a sound piece as a key tool within the trek of the performance.

The paralleling histories of Gwangju and that of the Republic of Ireland lie within the political turmoil undergone during Civil Wars on both sides. The inescapable residue lingering each nation is still echoing today. Lenihan and Freeman utilised the experience of one country’s turmoil, not to pass judgment upon, but to reflect on their own. While the research and influence was conjured during this period in Gwangju, it became a mirror in which the artists saw the state of our Republic within a different context. In a society in which oppression could be interpreted as heavier than our own, the artists were still able to point to the injustice and misrepresentation of the people of Ireland today.

There is a fine line between the pleasure and pain one feels toward to their home country. The pleasure of pride in our freedom of speech and the rich history we share, as presented in the performance by Freeman’s empowering sensual groans, not to mention her nonchalant statements of “I feel great”. This contrasted with the pain of change, the seemingly fruitless efforts we take toward our evolution could not be more well described than through Lenihan’s deafening screams as she simulates childbirth, running, panting and releasing beads of sweat, unsure of which beads will facilitate change. However, one cannot become apathetic; as a mother in childbirth you push on in the hope of new life, a new hope and a brighter future. These two critical points depicted are happening simultaneously, within one space, as the performative relationship between Freeman and Lenihans performances was unfolding.

Become What You Rehearse. You Deserve it has deep roots in its research within South Korea, and the reflection of the Republic of Ireland within it, yet the performance is not didactic. It does not push one agenda or one political stance over another. There is no ulterior motive or high ground that is being achieved. Lenihan and Freeman successfully managed to set up a dialectic with their audience. While one can acknowledge the context in which the work was conceived, contemporaneously the performance in many ways escapes it’s preceding context and becomes an autonomous work through its process.

Performance art, like conceptual art, is carried by its process and much of its meaning and richness happens within the process of making. While the performance was loosely choreographed with audio ques and patriotic gestures, it was also partially improvised. The choreographed movements alongside the improvisation came together under the sound piece which lead the performers and audience through its journey, even stating “So let’s begin”. Performance may only become through a process; no two performances may ever be the same. The performance does not simply end, one conclusion is not meet. The very best art remains open to interpretation and is continuously interrogated, as this piece shall continue to be. 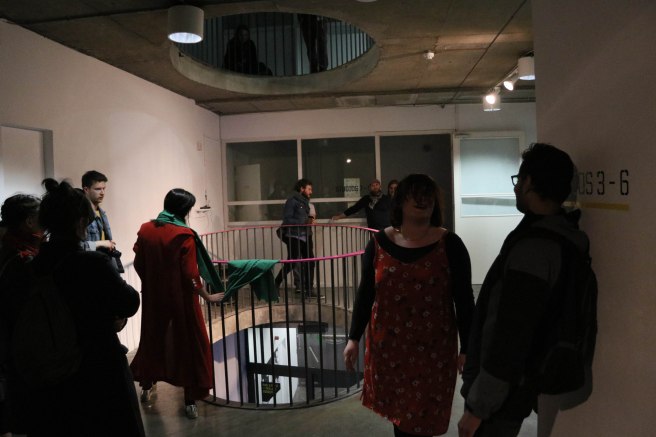 A work as rich in materials, context, reference and humour cannot be compressed or interpreted within one response or a piece of writing. What Lenihan and Freeman managed to achieve is a voice in an ongoing narrative subtly opening a dialogue about our place and reaction to the decisions being made on our behalf. The written word cannot explain the laborious screams of Lenihan, “SQUEEZE”. Nor can deep breaths and pure exertion of the artist be captured through a lens. Witnessing embodiments of pain and pleasure to instructions of “MORE STENGTH, MORE STAMINA, MORE ENERGY” as spoken by the condescending faceless voice surrounding the atrium is not something I will begin to try to convey. Neither may the text preceding the event, intended to provide context, explain what became of the performance as it unravelled. The expressions, empowerment and exertion by the artists can only be experienced by witnessing the performers within time and space. However, through these traces which are being contributed by myself, the photographers and all who took something from the project, Become What You Rehearse. You Deserve it manages to reach areas beyond its own ontology allowing a greater audience a taste of a dialectic that Lenihan and Freeman began far away from us in Gwangju.

Become What You Rehearse. You Deserve It took place on April 1st, 8 – 9 pm at the Atrium, Temple Bar Gallery + Studios. The work was performed by Ciara Lenihan and Lisa Freeman and curated by Roisin Bohan. Photography by Misha Beglin