It was the depth of the darkness that first struck me. The rick blackness mingled with my fingers as I thrust out my arms to avoid colliding with anyone who may be wrapped in it. The darkness of the two monstrous screens nullifies place-specificity, as the figure of giantess emerges and disappears into its shadows. The past, present, and future are collapsed into a single plane.

Images of a gigantic woman jump from screen to screen, forcing the audience to shift position to catch a glimpse of her. Lights flash in various points, transforming the experience of watching a film to an immersive experience where witnesses are unable to passively sit back and absorb what flickers before their eyes. Her movements shift forwards and backwards; pulsating rhythms creating breaths of light and sound

The room is a body; a negative space that envelopes its inhabitants so that it is not empty, just as the womb is not a void. Bodies of women slip through the shadows, making their presence known through the tapping of shoes as they walk, the rustle of a curtain being pulled along its track, the amplified scraping of paint from the wall. Women working in the shadows that obscure their presence, overlaying it with an opacity that cultivates an oceanic darkness embracing the audience. This embrace is illustrated by two gigantic arms that circle the room, moved along the track and directing the movement of the space’s occupants. The arms become an extension of the monstrous presence on the screens; a fractured body without organs. She is beyond the audience, surrounding us, with her ephemeral presence. Her shifting movements through the different screens, light, and material elements make the cinematic apparatus quiver, causing it to perform. 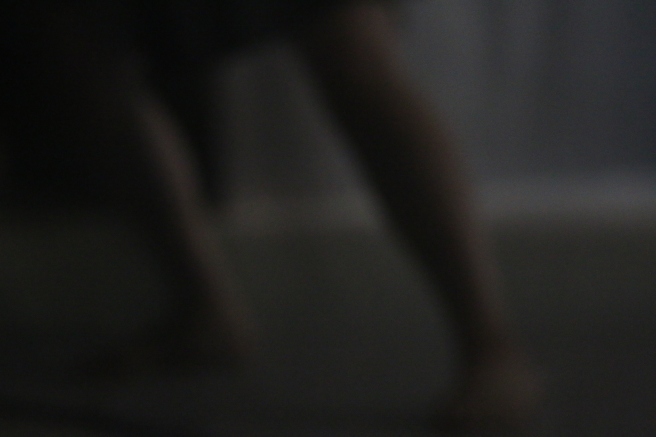 This is my second time witnessing Jesse Jones’s Tremble Tremble. I was able to experience it in its debut context in the Arsenale as the Irish Pavilion at the Venice Biennale. This time was different. On a personal level, when I most recently experienced the work, I carried a one-month old sleeping infant on my chest as I walked through the gallery, listening to her vocal quivers punctuate the soundtrack. Recently experiencing the radical bodily process of pregnancy and childbirth, combined with the physical and mental exhaustion of caring for an infant, I engaged with the work in a distinctive, psycho-biological level that offered solace to my wrecked self as a twice over mother.

The differences of experience extend beyond the autobiographical. Other variances emerge from the context of the exhibition. The Arsenale, which was the old ship building facility of Venice, is a distinctive work of architecture. Its long voluminous halls are transformed every two years into the galleries of the world’s longest running contemporary art event of its kind. Art is in this context is far from autonomous, with it functioning as politics by other means through its national identification (which is part of the Biennale’s appeal for me as a certified student of International Relations). Thus, the gendering of politics on this international stage in affiliation with the Irish nation is significant.

This brings me to a third reason Tremble Tremble was different, since it was now being presented after the repeal the eighth amendment of the Irish constitution that equated the right to life of the fetus with that of the mother. As Jones recently articulated, the eighth amendment meant that “A man is a man is a man is a man, always. A woman is sometimes equal to a foetus.” However, this is not the extent to which Irish laws are influenced by implicit and explicit sexist biased. While the project may have been rooted in a desire to propose an alternative to eighth amendment—the Law of In Utera Gigantae—its drive for political and cultural change is by no means restricted to it. The current political events of Ireland make it timely, not resolved.

The women of the shadows make the apparatus move, quiver, and quake. They are the ones whose work is unseen, but create an impact that is experienced in multifacted and multi-sensory ways. What draws me to Jones’s Tremble Tremble is not what is seen, but what puts the system in motion through actions shifting in the shadows. The invisibility of presence becomes a metaphor for the underacknowledged and undervalued reproductive labour that makes many human civilisations possible, but it also cultivates sites of instigating resistance and change. What emerges from the darkness is not all that matters, since it provides only a glimpse of what exists beyond illumination.

There is a quote by Silvia Federici from the exhibition catalogue that I read in tandem with Jones’s project: “Since the power to be affected and to affect, to be moved and to move, a capacity which is indestructible, exhausted only in death, is constitutive of the body, there is an immanent politics residing in it: the capacity to transform itself, others, and change the world” (47). I read bodies as extending beyond the limits of the human corporeal entity and into the complex ecologies that make life livable. Through the envisioning of this body as a giantess, there is a shift in the grounding of patriarchal culture that has perpetuated the oppression of women. The recent changes to Irish legislation may be the highly visible event that indicates something is shifting, but let us not get distracted as to ignore what is happening in the shadows. There is still much more work to be done.

Tremble Tremble by Jesse Jones and curated by Tessa Giblin was exhibited at the Project Arts Centre 7 June to July 18, 2018.