Through her post-digital performances, Laura O’Connor plays with the technological apparatus of digital media, which commonly involves streaming performances over the web while performing them live simultaneously in a gallery space. O’Connor begins the work Uncomfortable State standing in front of a green felt cut-out of Ireland. Across from her there is a laptop that is streaming her performance over YouTube. The live feed of the performance is projected onto a wall facing her, making it evident that she is using green screen to transform the map of Ireland into a video of Irish Sea, the body of water that women travel to access abortion in nearby England (O’Connor 2017). The audience is presented with two simultaneous versions of the performance — one in the shared physical space of the artist, and the other mediated by digital video. She wears a skin coloured body suit and is applying green paint to her body, which renders her body invisible in the waves of the Irish Sea in the digital rendition of the work. Over the course of an hour, she covers her body, resulting in a crude overlay of her bodily form with the video of crashing waves in the streaming version; an uncanny rendering where is both veiling and revealing. There is a lag between the live presentation of actions and the video feed, compounded by the delayed audio track that feeds back into the gallery, with the performance co-existing in digital and physical space. 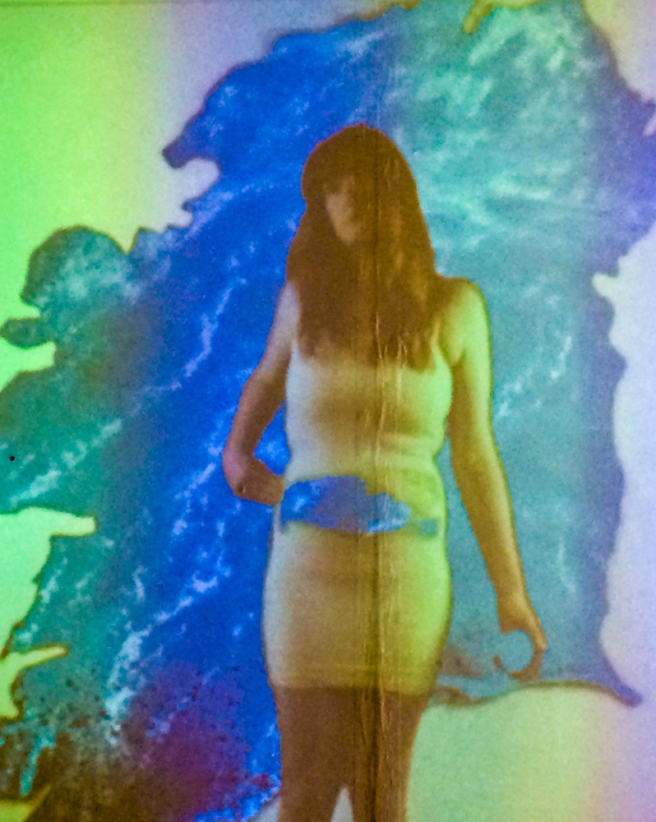 O’Connor places her body under erasure – sous rature, which Jacques Derrida describes as something inadequate yet necessary (Derrida 1997), encompassing the state of maternal bodies in Ireland where strict legislation that rendering them vessels for the propagation of future citizens. At the same time, she plays with the trope of “Mother Ireland,” which as Geraldine Meaney (2010) points out, posits the nation of Ireland as a passive female body. There is an ambivalence throughout the performance, though not just through its content that draws Irish conservatism concerning gender and sexuality to the fore. Ambivalence is introduced through the juxtaposition of the live to the digital within the context of the gallery in a manner that emphasises the mediation of the technical apparatus. While the performance could be viewed online and was streamed to several television monitors placed throughout the art space, only within the context of the gallery where O’Connor is present both physically and digitally, is technological mediation most pronounced as the imperfections of digital rendering conceals while revealing O’Connor’s body, drawing correlations with the bio-political control of women’s bodies in Ireland.

O’Connor’s use of green screen evokes Hito Steyerl’s play with the technique in her 2013 video How Not to be Seen: A Fucking Didactic Educational .MOV File, within which Steyerl explores the different formal means of making images visible and invisible through the camera, such as resolution and various transitions, drawing attention to the invisible political and economic structural supports that mediate the production and sharing of images. In “Lesson III: How to Become Invisible by Becoming a Picture,” Steyerl uses green paint to blend into the test patterns flickering on the screen, eventually fading herself into the image itself. In her analysis of the video, Katja Kwastek describes how Steyerl creates a “seamless transition from human life to digital imagery” that “addresses computer vision from the perspective of the world becoming a picture and this picture being subject to analysis” (Kwastek 2015, 80–81). Like Steyerl, O’Connor also exposes the technological apparatus of digital image production through her performance. While Steyerl creates a broader commentary on the mediation and control of the world as imagery through analysis, O’Connor draws from the legacy of bio-political control in Ireland that renders the female body as a passive maternal vessel for the perpetuation of Irish citizenship through political legislation. Here digital media is not just used to critique itself as a mode of image making, but is used as a means to expose the ideological framing of the maternal in the context of Ireland.

Laura O’Connor performed Uncomfortable State as part of Livestock: Interface at the Glitch Festival (curated by Mart) at RUA RED in Tallaght on 13 May 2017 and at the What if? Performance Festival at Town Hall Cavan on 20 May 2017.

Kwastek, Katja. 2015. “How to Be Theorized: A Tediously Academic Essay on the New Aesthetic.” In Postdigital Aesthetics: Art, Computation and Design, edited by David Berry and Michael Dieter, 72–85. Hampshire and New York: Palgrave Macmillan.