It’s 2004 — the year of a presidential election. I am disillusioned from protesting a war that happened anyway. I just began a class on Interventions at the Museum School with Jamie McMurry. We are shown different ways of disruption through performance, which includes the actions of Reverend Billy and the Stop Shopping Choir in the Disney Store. First thing I remember thinking is “you can do that?!” then “I want to do that” and my spirit of protest was reborn. 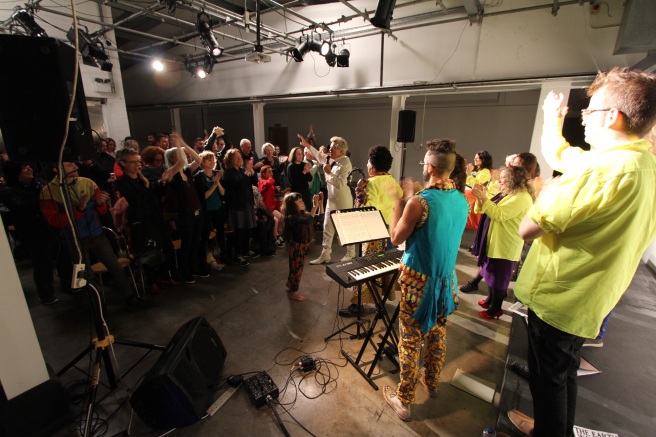 The scenario takes the form of a Christian revival, led by a charismatic preacher. However, the energetic ambiance of the experience is created by the choir, whose songs take inspiration from gospel and Civil Rights protest songs, appropriated for the twenty-first century context. The energy in the room is contagious — as the songs roll out, more and more people in the audience rise to their feet and sing along.  Instead of trying to draw followers of faith, Reverend Billy and the Church of Stop Shopping attempts to use the strength and comfort of song to draw our attention of the many injustices that humans currently face, calling us to action. Without isolating specific issues of discrimination or oppression, the choir’s repertoire and Rev. Billy weave together different aspects of our consumer-led destruction that increasingly alienates our relations to each other. The messages are not accusatory, though at one point Rev. Billy refers to my toddler daughter, who watches Netflix on an iPhone, as a sinner. The comment is made in good humor, though I realise that it functions as an apt illustration of an increasingly screen-reliant society whose impact we have yet to fully experience and comprehend.

As I listen to the songs unfold in this theatre space in Dublin with the international choir, I am struck with its American characteristics, including the references to the rise of Trump’s America, recent events in Charlottesville, as well as the protests in Ferguson. As an American living in Ireland since 2013, many of these events occurred after I left, meaning that I experienced them, and their fall out, through glimpses of social media on foreign soil. I felt a strong emotional connection in these moments, particularly during Sister Dragonfly’s solos in their rendition of “Eyes on the Prize,” a quintessential Civil Rights anthem. Through the beauty and love of her voice, I felt the pain of recent tensions.

The day before this event, I hosted a seminar about art in public space, with Reverend Billy, Savitri D (director of the Stop Shopping Choir), London-based artist and DLAF performer Rhinnon Armstrong, and Bbeyond Belfast member Brian Connolly. During the seminars, these artists shared their various experiences of working in public, revealing some vital strategies for venturing as performers outside the confines of the gallery. One key point that Savatri and Rev. Billy discussed is how the work the space of potential confrontation — how to diffuse interactions with authority figures and treat the relation with this other person as a site of performance. Savatri emphasized how this is a wide space, and thus unpredictable, but also a great site for growth and change. At the end of the seminar, Sister Dragonfly shared an experience from the protests in Ferguson when she found herself face-to-face with a police officer. She described how at this point, she wanted to launch into a tirade at the officer, but instead just asks him: “Why do you all hate us so much?” The officer said he did not, to which she responds, “I don’t want to hate you, I’d rather hug you.” A moment of human connection in the embittered fury of injustice, it provided a powerful instance of working in the space of interrelation, even with figures of authorities in charged situations. The act blurs the line of performance, protest, and raw humanity, which can be sensed in the performance of the Choir itself, though not to such an extreme degree. Dragonfly’s retelling of this experience sits in my mind as I listen to her sing from her depths of her soul, where her actions are not just about performance or activism, but she sings a song of survival.

The performance ends with us leaving the gallery space, moving into the streets of Dublin. We are directed to touch the wall of the building, silently move our hands along the concrete of this structure. After we make it to the end of the façade, Rev. Billy draws our attention to a young tree that managed to grow through the cracks of the concrete edifice — pointing out how walls don’t work. Walls don’t stop the growth of nature; walls won’t stop the flow of people or ideas. Wendy Brown (2010) describes how walls are not just ineffective, but function futile symbols of nations whose strength is in decline; these “elaborate theatres of construction” are desperate, visual attempt to cling onto waning sovereignty. Despite the ineffectiveness, the desire for walls proliferate.

At this point in the performance, we turn to each other in the form of a circle and sing one more song. A local kid on his bike gets caught in our formation, looking with a front of cool detachment as we sing out our determination to keep working for a better future. He retains a poise of disinterest, but he stays in the centre of our circle until the end. Perhaps this is just a strange spectacle for him — a disruption to the flow of urban life, but the potency of our human connections cannot be denied. 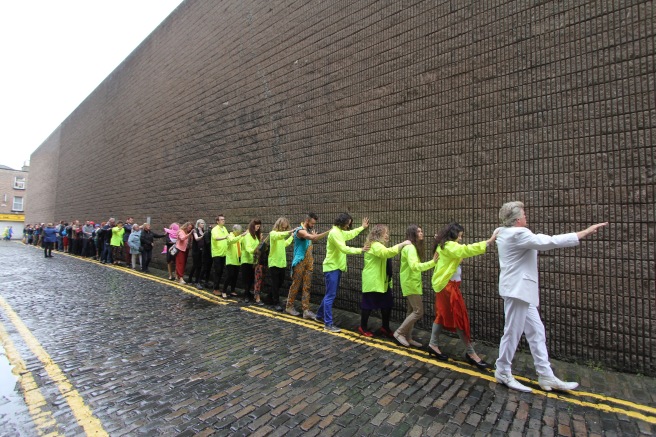 Reverend Billy and the Stop Shopping Choir performed as part of the 2017 Dublin Live Art Festival, curated by Niamh Murphy and Francis Fay. Photo from Ferguson by Charles Rex Arbogast for AP. Other photos by Fiona Killeen (www.blueprintphotography.ie)