Stillness is not devoid of motion, since complete stillness is impossible, like silence after John Cage. Even if an object does not appear to be moving, it exists on a massive celestial body—the Earth—that is perpetually in motion. The stillness of the human body is a major illusion, as it vibrates with life from minute gestures, the pulsating flow of blood, the tingling energy of the nervous system, along with the many other corporeal processes that ceaselessly function. It is the illusion of stillness that make it so provocative, as it is not a void, but requires a deep engagement to fully value what is already present. Thus, Inma Pavon’s performance that complimented Danny McCarthy’s Beyond Silence: A Bell Rings in an Empty Sky appropriately draws from the minimal repertoire of stillness.

Dressed in a white Kimono, with her face covered by a sheer cloth, Pavon minutely paces around McCarthy’s installation of un-rung bells. Her steps are minor, her back erect, and her hands folded onto each other through the hours that the work takes. The white of her costume contrast the rich blue walls, which become the empty sky of McCarthy’s title. Like a moving cloud drifting across the heavens, Pavon resists the temptation of movement, maintaining a composed posture that takes extreme bodily and mental dedication. The minimalism of her actions draw attention to the most subtle gestures, charging them with an energy that is not absent of movement, but loaded with the potential for movement. Pavon’s appearance echoes the marble busts that line the walls, emphasizing how McCarthy’s installation of bells do not fill a white void, but create an intervention in a space commonly not utilized for the exhibition of art: the gallery floor. 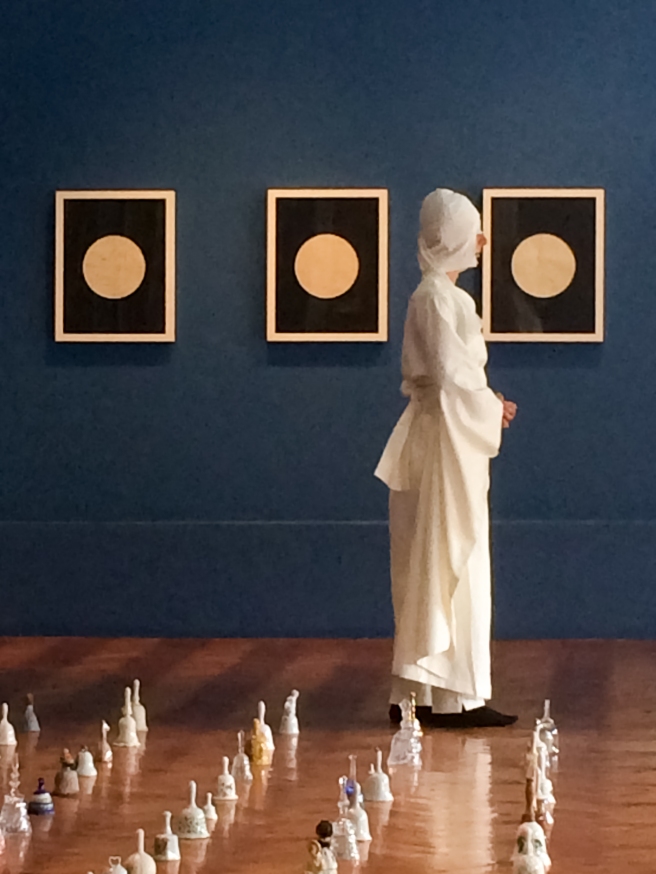 Pavon’s steps delicately around the bells, maintaining a persistent walking meditation that adds an illusion of preciousness to McCarthy’s objects. The bells are kitschy tchotchkes, the collectable objects that function as souvenirs. These are not the sort of objects that enter museum collections, though they are of the sort that are made precious through personal accumulation. McCarthy’s act of placing them within a fine arts gallery shifts their significance, which is further transformed by Pavon’s graceful motions into a spiritual reverence. Her actions imbue an aura around these humble objects that are detached from their histories of personal affection. 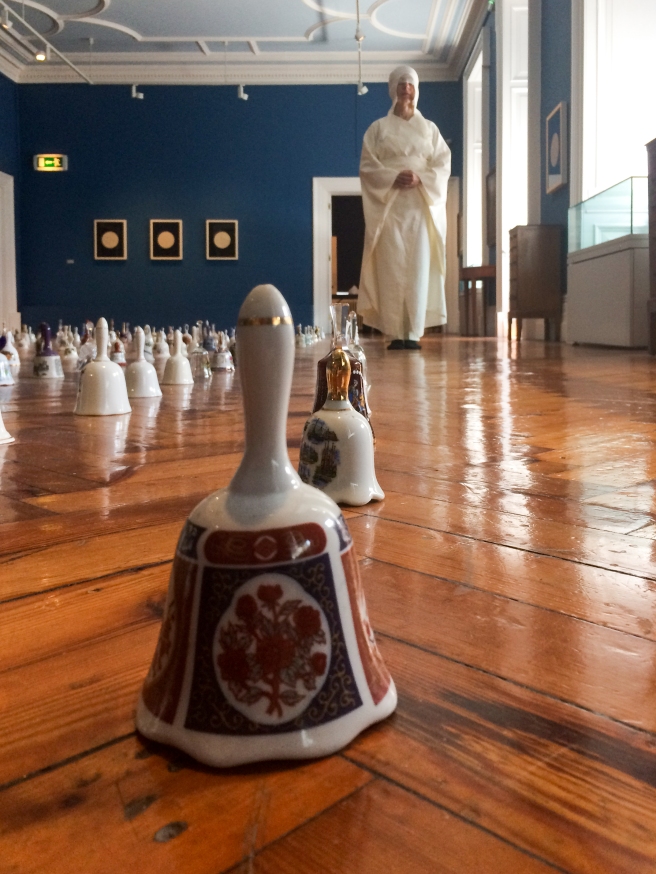 Witnessing this performance requires an empathetic stillness on behalf of the viewer, for any sudden motion disrupts the energy that Pavon cultivates. The subtleties of Pavon’s performance contrast the growing sonic chaos seeping into the room that day. First it is the sounds of the café, the other galleries, and even the street that infiltrate the space, accompanied by the hum of the building itself. Then it is the sounds produced by David Stalling, Anthony Kelly, Katie O’Looney, and Danny McCarthy in an adjacent gallery that contribute to the aural ambiance of the experience. As such, a collaboration forms across spaces through the subtleties that stillness and silence afford. Even though McCarthy’s interventions already draw attention to the liminal spaces of the Crawford galleries, Pavon’s actions, and later the sounds of McCarthy and others, enunciate these qualities through their performances. In particular, Pavon’s impossible stillness emphasizes the fullness of silence.

Inma Pavon performed at the publication launch of Danny McCarthy’s Beyond Silence: A Bell Rings in an Empty Sky (available from Farpoint Recordings), along with a sound performance by McCarthy, Katie O’Looney, David Stalling, and Anthony Kelly at the Crawford Art Gallery, Cork on 8 July 2016. McCarthy’s exhibition of the same title runs from 26 May to 12 August, 2017. Photographs by EL Putnam.