The forecast called for rain. However, in Ireland, that is not the whole story. Light misty rain? Sporadic rain? Steady beating rain? Rain. I can handle a little rain — or so I thought.

I was due to perform Landscape at the summer edition of the 2015 Dublin Live Art Festival. The parameters were simple: I would wear a white, neoclassical style dress and roll in the grass for the duration of the event (four hours). My intention was to create grass stains on the white cloth, creating an abstract image from my gestural interaction with the grounds of the Casino at Marino. In order to emphasize the frivolity of the work and introduce an element of fantasy, I dyed my hair a deep red color.

When I arrived at the Casino that day, the rain was relentless. Typically with such heavy downpour, the rain tends to let up after awhile, and so I tucked myself into our make shift shelter and waited. A number of us periodically checked radar reports, which gave indication of a break. However, the rain just persisted. I prepared for the performance as I intended — dressing only in a white leotard and wrapping myself in a sheet of white jersey material. I made no modifications. I assumed that since I would be moving throughout the performance, I would generate enough body heat to counteract the chill in the air.

I began the performance. I paced the grounds of the Casino barefoot, eyes trained ahead. A groundskeeper drove by me on a lawnmower, asking if I needed a coat. “No thank you,” I said through clenched teeth. Once I reached the far side of the building, I dropped to my knees and began to roll down the hill, letting gravity take over. As anticipated, my world spun around me. I took some moments to collect myself on the damp earth, and then continued my rolling action. At this point, the cold, wetness of the day was not bothering me, but the repetition of aggressive rolling was making me nauseous. I persisted, however, attempting to alter my pace so my body could keep up. I tried to prolong periods of stasis, though I could only last so long lying on the wet cold ground in nothing but a piece of white jersey. I was trapped between actions: maintain stillness and be cold or continue rolling and vomit. Neither was part of the plan.

After about forty minutes, I felt as though I lost control of the performance. I lost trust in myself and trust in my actions. As an embodied performer, I am in the middle of the work. I have little sense of the scene I create. The corporeal sensations I experienced while performing Landscape evoked physical memories, making me think that I looked like a party girl at the end of a long night out. While a provocative image, this was not my intention when I was developing the piece. I needed to take a step back, mentally and physically. I was cold, nauseous and in the midst of a performance that was rolling away from me (bad pun intended). I stood and walked with my head held high into the tent. Once I entered the shelter, I realized that I would not be able to warm up until I took off the soaking white dress that was clinging to my body. My stomach continued its turbulent dance as I sat down, covered myself in blankets, and dropped my face into my hands. It was over. My anticipated durational performance lasted forty minutes. I was devastated. And to top it all off, even after the repeated acts of rolling, my white dress remained as white as when I first put it on. No grass stains. The piece was a failure. 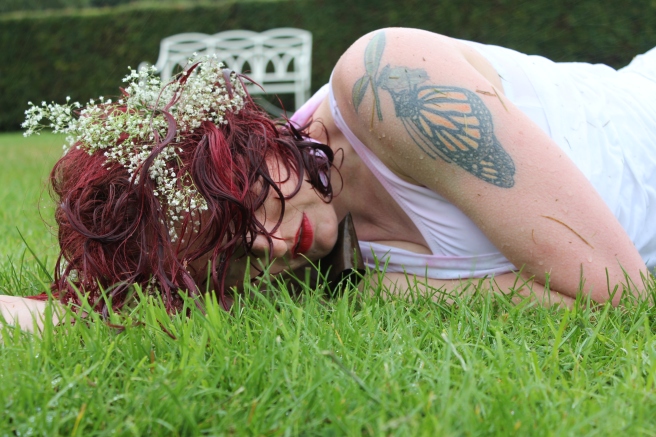 It took me a while to come to terms with this performance. I spent a great deal of time pouring over documentation. At least I created some strong images, but I had no idea what the piece meant anymore. I like to invite beauty into my work, though I want it to be tinged with discomfort, the cause of which remains inexpressible. I detected this in the documentation, but it wasn’t enough. The performance was now in the world, but I could not tell you its significance; is it necessary to know what every performance is about? I talked to other people who performed that day who were also impacted by the inclement weather. I felt comfort in the fact that the incessant rain put a damper on everyone’s plans — at least I was not alone. I managed to get a hold of some video and got a sense of how extreme the weather was that day. It’s amazing that I managed to last the time I did out in the field. Bit by bit, I managed to overcome the sense of disappointment, and even came to appreciate the performance to a degree. Despite this, it remained amorphous in my mind.

It was not until early January 2016 — almost six months after I originally performed Landscape —that I gained a sense of what the piece constituted. I was walking in St. Anne’s Park with my daughter and Níamh Murphy, director and curator of DLAF. We spent the afternoon catching up on life and other such things. Our conversation turned to DLAF at the Casino. In response to my performance, Níamh described how she saw a muse wrestling with the humus of the earth. The image of a creative spirit struggling with the mess of empirical reality, with the latter winning in the end, allowed me to reconsider the work in a new way. Through its enactment, the performance was about failure, cold and dirty failure, but also persistence. Unintentionally, this piece that I carefully designed to meet its environmental context became a reflection of my current experiences as an artist struggling with grand plans and limited financial resources, time, energy, and opportunities. It may have failed according to my original plan, but that is because it became something else.

It is not unusual for an artwork to change meaning in the process of creation or reception. Very rarely does an artist leave the studio having created a piece that perfectly matches what she conjures up in her imagination before starting. The audience do not always receive it as intended. The funny thing about performance is that this process of transformation may not happen in the privacy of the studio, but can take place in full view of a live audience.  Production and reception are simultaneous. These elements of chance are what make performance both exciting and terrifying. An artist can never have a full sense as to how a work will unfold until it occurs, no matter how well prepared she may be. The trick is to remain open to these changes and trust the process. I can’t say this happened when I performed Landscape, but at least I can look back at the performance now without considering it a failure. Rather, it was just art unfolding in the present tense.

2 thoughts on “Washed Out: Embracing Failure”